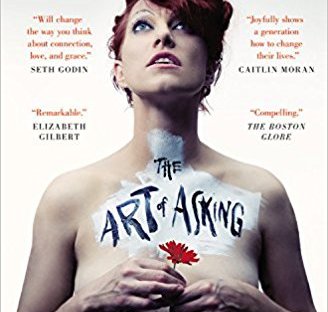 I spent a lot of time reading over the summer, plucking books off of my reading list—a list that grows at such a voracious pace I know I will never come close to finishing it off. One of the books I FINALLY read is Amada Palmer’s book: The Art of Asking. Has anyone else read this book? I really enjoyed it! 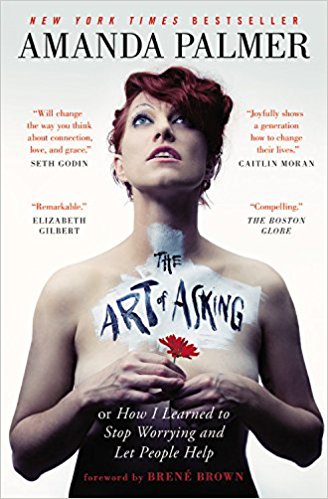 Now, Amanda Palmer an enigma as far as famous singers go. People seem to either love her or hate her. For those of you unfamiliar with her work, I’d describe her singing and performing style as an old-school Vaudeville act containing hints of burlesque and cabaret, occasional nakedness, irreverent humor, colorfully descriptive lyrics, with frequent use of the ukulele as an accompaniment. In other words, she doesn’t fit neatly into any particular category of musical entertainment. She’s in her forties, the wife of author Neil Gaiman. (They have a young child together, Anthony.) Amanda Palmer is intelligent and educated. She’s a writer, a blogger, a songwriter, a singer, a performer, and a musician.  She was asked to do a TED Talk back in 2013.  This is the talk that inspired her book. It’s the memoir of her life…so far.

I encourage everyone to listen to her TED Talk, even if you never plan on reading her book.

Amanda Palmer’s words hit home, especially once I read her memoir. I’m not the kind person who likes to ask for ANYTHING. I expect my loved ones to cosmically know what I’m thinking. I wait until I feel useless, alone, and depressed before I whine, demand, cajole, and order others about. I used to play the part of the martyr, although not nearly as often anymore. “Poor me! Why doesn’t anyone help me? Nobody cares.” And it’s ridiculous, really. All I needed to do was ASK. Simple. It’s not likely that my family members are going to say no. They love me. If I need help, they will help me. The problem is, I expect them to intuitively know what I need. It’s almost as if the act of asking for the “things” (love, help around the house, whatever) negates the actions of those around me. It’s as if my asking for help with, for example, unloading the dishwasher makes the act of unloading the dishes less valuable than if my family members did it without prompting. Did the dishes get put away?  Yes, but there’s a part of me that thinks that I shouldn’t have to ask, that everyone around me should just KNOW what needs to be done.

Why do I behave this way? Why does anyone? Why is asking so difficult? I think my core problem is that deep down I don’t think I’m worthy of help, that I’m not deserving of it. I feel like a fraud in my own life. Never good enough. Not a REAL grown up, writer, mother, wife, whatever—not like other people. If I were truly worthy, I feel like others would just KNOW what I needed from them and I’d never have to ask for anything. It’s a silly thought process when seen it written down so plainly. I’ve spent years thinking about my behavior, educating myself on why I act the way that I do, on why I create my own misery. The good and bad of this is that I am not alone, not by a long shot.

Amanda Palmer’s husband, author Neil Gaiman, might have said it best on his blog:

Some years ago, I was lucky enough invited to a gathering of great and good people: artists and scientists, writers and discoverers of things. And I felt that at any moment they would realise that I didn’t qualify to be there, among these people who had really done things.

On my second or third night there, I was standing at the back of the hall, while a musical entertainment happened, and I started talking to a very nice, polite, elderly gentleman about several things, including our shared first name. And then he pointed to the hall of people, and said words to the effect of, “I just look at all these people, and I think, what the heck am I doing here? They’ve made amazing things. I just went where I was sent.”

And I said, “Yes. But you were the first man on the moon. I think that counts for something.”

And I felt a bit better. Because if Neil Armstrong felt like an imposter, maybe everyone did. Maybe there weren’t any grown-ups, only people who had worked hard and also got lucky and were slightly out of their depth, all of us doing the best job we could, which is all we can really hope for.

Thank you, Sandra, at What Sandra Thinks for inspiring this post and be sure to check out her blog!

11 thoughts on “The Art of Asking” 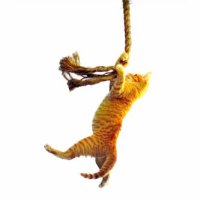